Fashion Returns to the Drawing Board

After years out of favor with editors and brands alike thanks to real-time and affordable runway photography, fashion illustration is having a resurgence. Chanel, Dior, Gucci and Prada are just a handful of the brands that now regularly commission sketches of their latest catwalk creations, while names like Donald Robertson, David Downton, Meagan Morrison and Rei Nadal are just some of the artists commanding thousands of Instagram followers.

Now, coinciding with the arrival of fashion month, two exhibitions are celebrating some of the genre’s well-known names.

In Paris, “Claude Parent: Dessiner la Mode,” on display until Sept. 25 at the Galerie Azzedine Alaïa, and is a retrospective of the architect’s fashion drawings inspired by Mr. Alaïa’s work. In London, the specialist art firm Gray M.C.A. and the fashion website SHOWstudio are hosting “Drawing on Style” until Sept. 20 at Gallery 8 on Duke Street, with illustrations from the 1930s to the present day.

Connie Gray, co-founder of Gray M.C.A. and a curator of “Drawing on Style,” said art collectors had a newfound appreciation for the types of fashion illustrations in the exhibition, including magazine covers drawn for Harper’s Bazaar and Town & Country and archive illustrations of collections from Christian Dior, Givenchy and Yves Saint Laurent.

“For too long, fashion illustrators and their illustrations were seen as a secondary art form — rooted in the idea that decorative art, or art with function, is somehow lesser,” Ms. Gray said.

Historically, she added, because illustrations had a more commercial edge and were used primarily for the marketing and communication of style trends, illustrators rarely became household names. 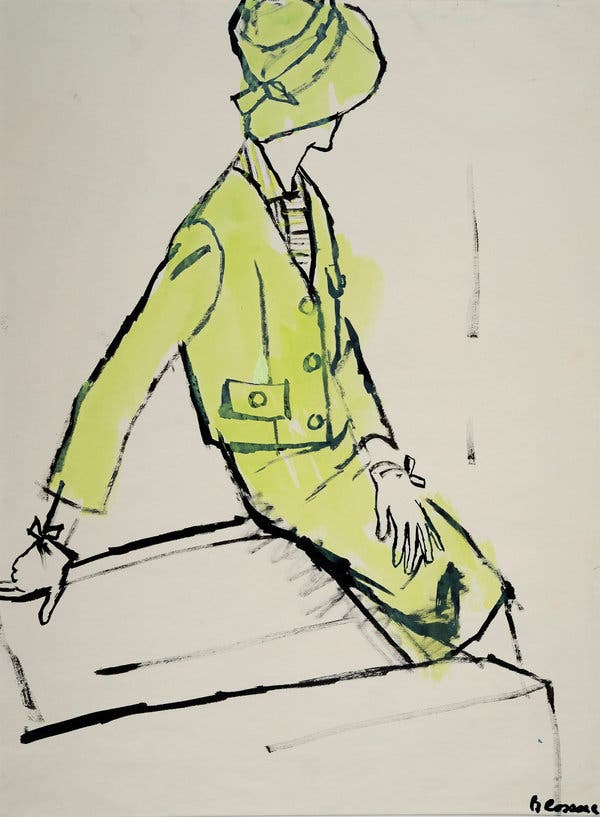 But appreciation for their work has grown. For example, a gouache drawing by René Gruau, — who has two illustrations in the “Drawing on Style” exhibit, and whose work for Balmain, Lanvin and Dior epitomized the glamour and grace of the 1950s — fetched $104,500 at Christie’s in 2010.

Illustrators such as Mr. Gruau, Bernard Blossoc and René Bouché “created their own recognizable style to distinguish them from their peers and honed specialized skills to deliver their images. They were real pioneers,” Ms. Gray said. “They needed to understand not only the life form but also the process of designing, and translate what they saw into a work of art that would sell a thousand frocks. Most had gone to the world’s leading art schools and could have found huge acclaim for their talents had they chosen a different path.”

Mr. Parent, who died in February, was one of France’s most influential architects of the 20th century, though he began his career as a fashion illustrator. He also was a longtime friend of Mr. Alaïa’s, and in the months before Mr. Parent died, he collaborated with his grandson, Laszlo Parent, on a series of fashion drawings in ink inspired by the Tunisian designer’s creations. Each one has silver lines angled across the items of clothing, a graphical and artistic element, according to Laszlo Parent.

“He included them to show the way the female body was emphasized in and by the dresses, exposing the axis and motion of the silhouette, and seeking a certain link with architecture,” he wrote in a book that accompanies the exhibition, edited by Donatien Grau.

Mr. Grau said by telephone from Paris that Claude Parent, who gained fame as the theoretician of the “oblique function” in architecture, based on tilted surfaces, used the largely monochromatic works to show that he and Mr. Alaïa believed that clothing was an intimate and direct form of architecture. “It tackles ideas around the changing female form and lives of women,” Mr. Grau said. “No one lives their lives like a straight line; they live in an oblique way.”

Nick Knight, the British fashion photographer and director of SHOWstudio, said he believed that the significance of fashion illustration would only grow.

“Twenty-first-century fashion can sometimes feel a bit removed from people’s lives, and it can be hard to see through its corporate haze and Instagram filters,” he said.

“But when you see a painting or a drawing, you also get an opinion, a sense of someone’s emotional response and feeling to a garment as well as its relationship with the contours of the body,’’ Mr. Knight added. “We are so used to seeing heavily edited visuals that the true tradition of an artist with pen, ink or paint and paper can make a startling impact. Illustration in today’s world is incredibly powerful.”